Protection of forests from pests and diseases

At the end of 2018, in the forest fund of the Forestry Forestry of the Republic of Belarus, foci of pests and forest diseases acted on a total area of ​​136517 ha, including 32459 ha requiring control measures. Compared to the same period last year, this area decreased by 35976 and 22425 ha, respectively. Forest diseases accounted for 91.6% of all foci in the Republic of Belarus and 94.6% for MHF RB, of which foci of the root sponge account for about 68%.

The dynamics of foci of pests and forest diseases according to the MLF RB: 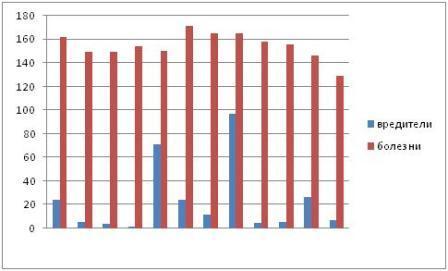 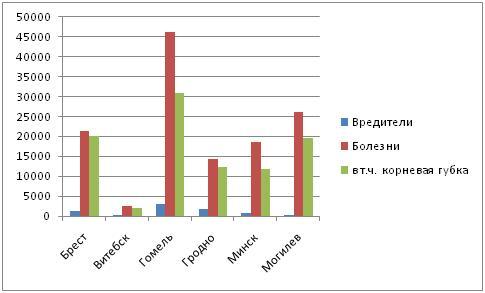 In the forest fund of the Republic of Belarus, under the influence of various adverse factors of an abiotic and biotic nature, he died in 2018. 49 995 ha of plantations, which is 1.4 times more than in 2017, while coniferous plantations (99%) were mainly affected by the death. The maximum loss of forest stands in 2018 was recorded on the territory of the Gomel GPLHO – 20313 ha, or 40.6% of the total area of dead plantations in the Republic of Belarus. 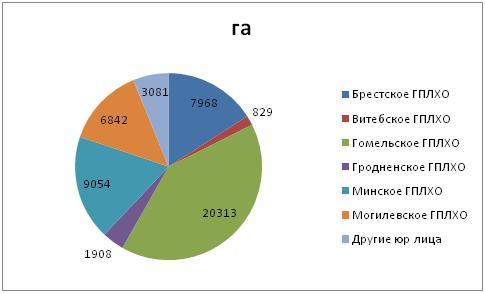 The forest pathological and sanitary state of the republic’s pine forests in 2018 was determined by a set of adverse environmental factors: hurricane winds, droughts, forest fires and others, which led to weakening of plantings and a decrease in their resistance to plants and biocidal against pathogens. 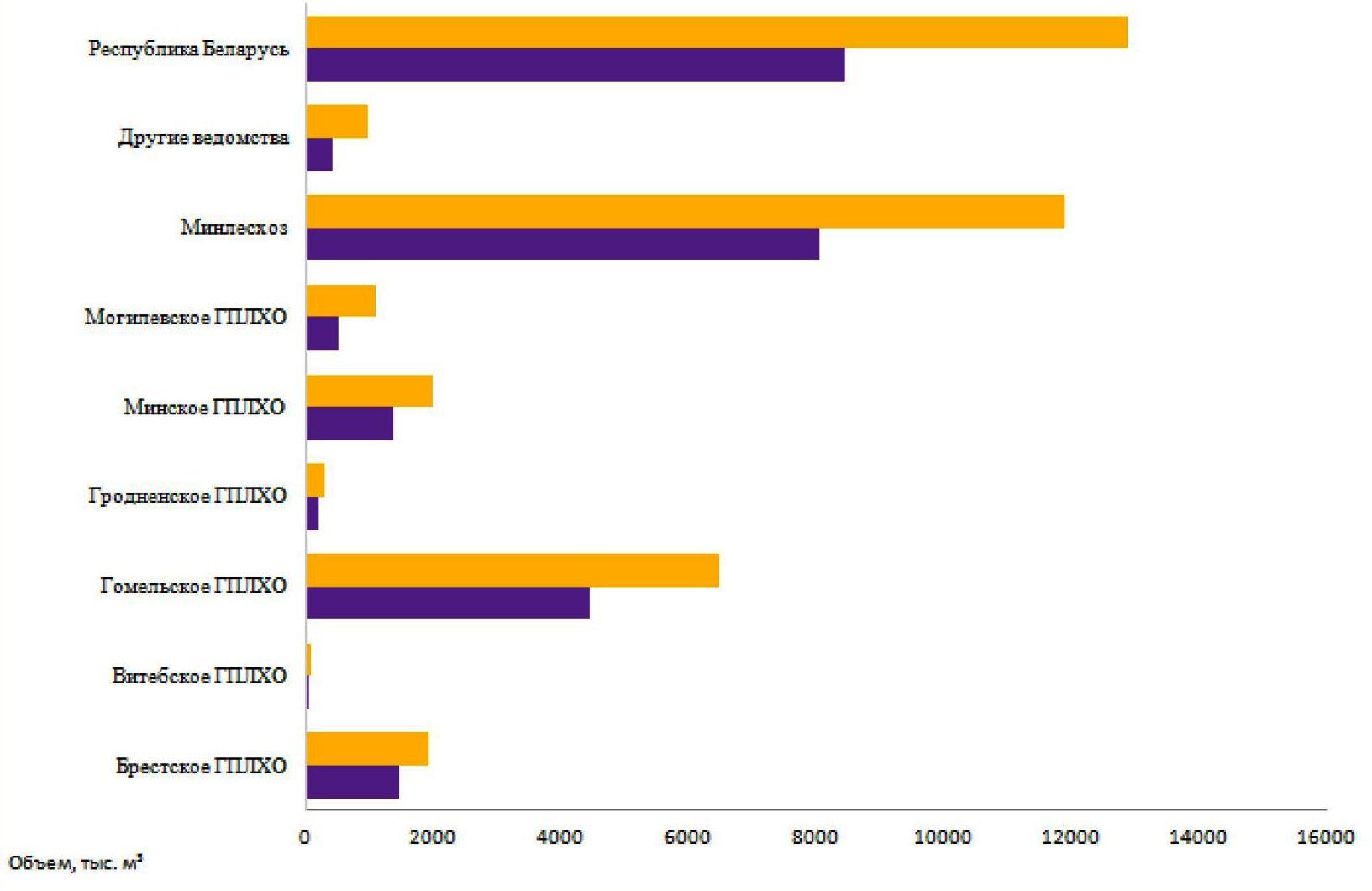 Geography of clear felling in pine stands for 2018: 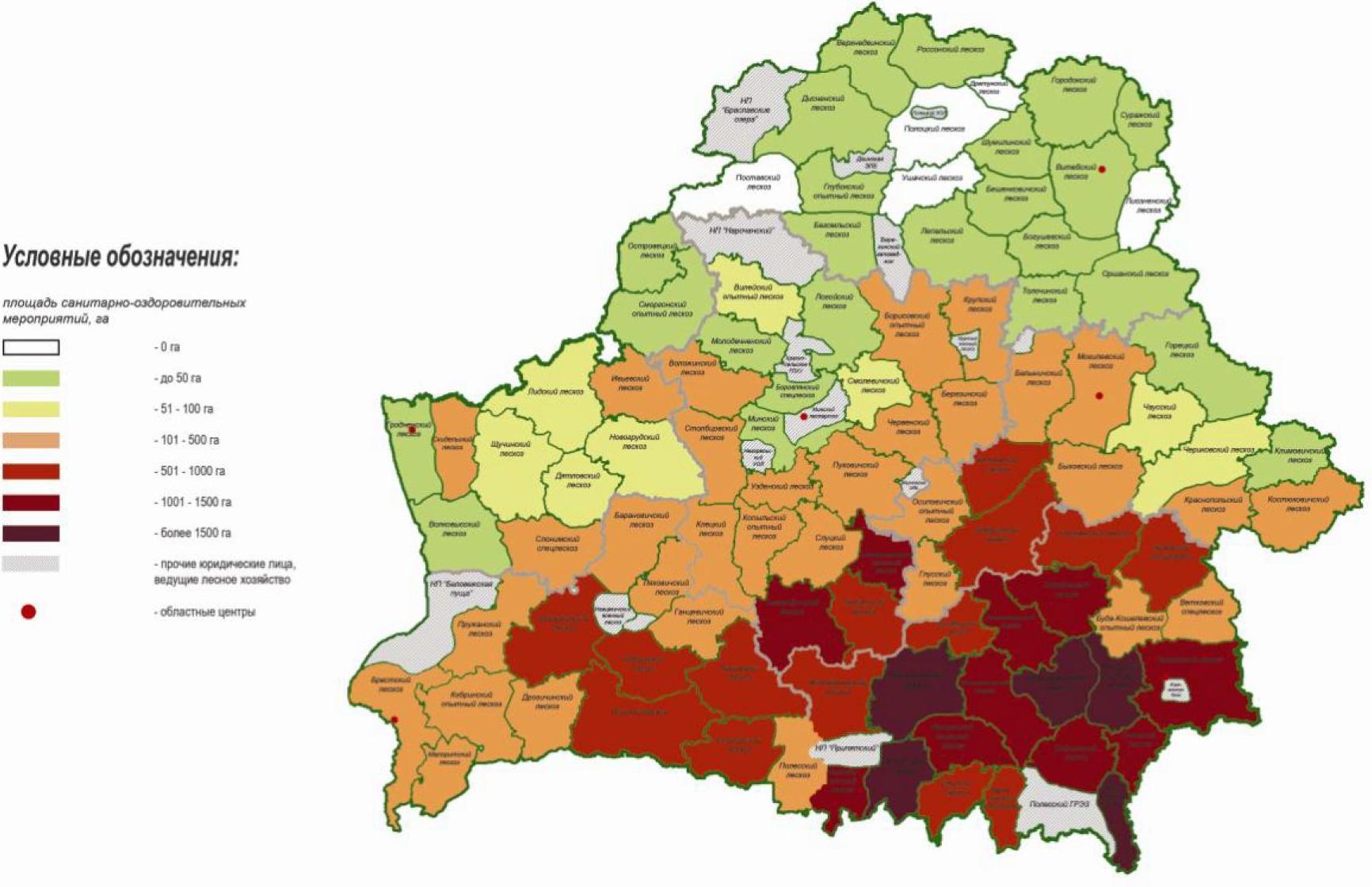 According to the results of a monthly survey by the leshozes of the sanitary condition of spruce stands in 2018, it was established that the area of the stands that have lost their biological stability, requiring clear cutting, amounted to 9293 ha with a volume of 3244 thousand m3. 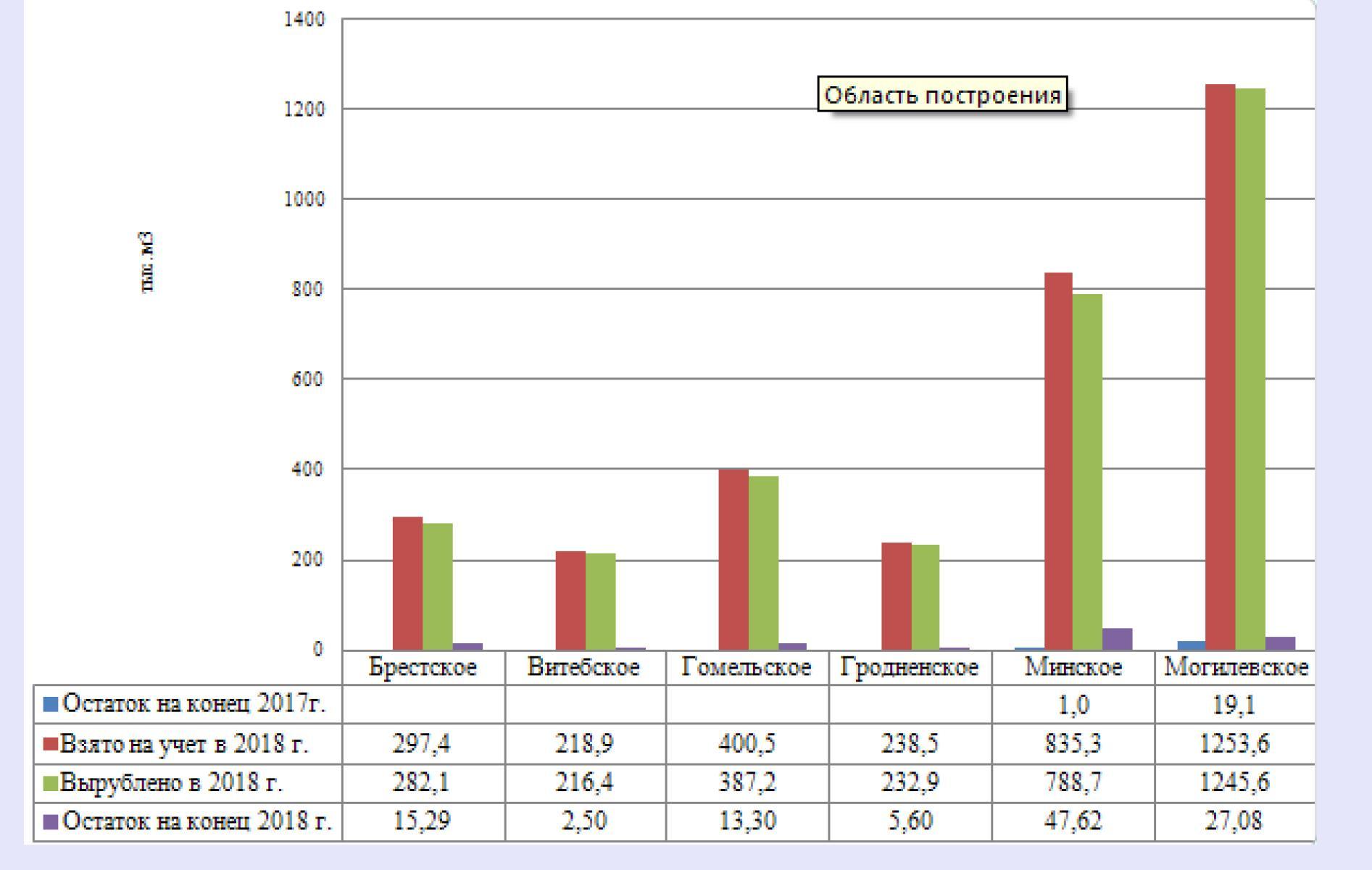 Considering the above facts, the high survival rate of the bark beetle in the winter, as well as the favorable climatic conditions for the flight of the bark beetle, the drying of spruce plantations in 2019 will continue with an increase in volumes.

In order to monitor the abundance of the winter moth and green oak leaflet, as well as to monitor their dynamics in oak stands, pheromone dispensers “OWABEN” and “TORVABAT” were used. The drug “OWABEN” was used on an area of ​​35,475 ha.

The foci of the oak sponge, as well as transverse oak cancer, remained unchanged during 2017 and amounted to 6.9 hectares (Klimovichi forestry) and 3 hectares (Shumilinsky forestry), respectively. Other diseases of oak plantations in 2017 were identified on an area of ​​20.8 hectares. During the year, foci of oak diseases were eliminated as a result of forest protection measures on an area of ​​83.8 ha, and died out under the influence of natural factors of foci of diseases on an area of ​​18.5 ha. At the end of the year, the area of ​​foci of oak diseases amounted to 4494.2 hectares, including 1915.2 hectares requiring control measures. 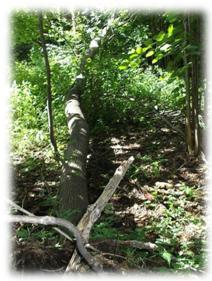 Over the past two decades, in extremely dry growing periods, characterized by significant deficit of precipitation, high temperature and low humidity of the atmospheric air, ash plants have been drying out in the Republic of Belarus.

The main biotic factors that negatively affect the state of ash plantations in 2017, as well as for the entire observation period, were: root and stem rot.

In the reporting year, employees of the Bellesozashchita Institution conducted a reconnaissance forest pathological examination of ash plantations in Disnensky, Vitebsk, Yelsky, Mozyr and Starobinsky forestries.

According to the results of the examination of the ash trees of the foci of stem pests of the great Hylesinus crenatus F. and the variegated ash-tree beetles Hylesinus fraxini Panz., As well as damage to the ash emerald narrow-body goldfish Agrilus planipennis Fairmaire were not found.

One of the main reasons for the weakening and drying out of birch in forest stands throughout the republic is the defeat of their infectious disease – bacterial dropsy or bacterial wet cancer. In case of a disease, a characteristic feature is the defeat of the branches and trunks by the phytopathogenic bacterium Erwinia nimipressuralis (Carter). The disease is characterized by damage to the vascular system and parenchymal tissues of the bast, cambium and outer layers of wood.

In July-August 2017, there were favorable weather conditions for the development of bacterial dropsy on hardwood. 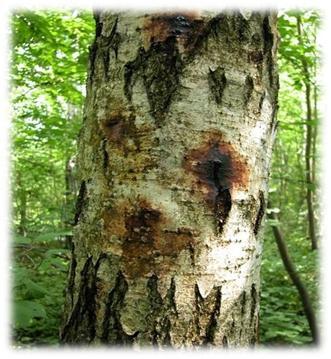 In 2017, foci of stem pests of birch plantations arose in the Minsk GPLHO Luban forestry on an area of ​​1 hectare, but liquidated or extinct as a result of forest protection measures.

For comparison, in 2016, according to the MLC, the area of ​​foci of bacterial dropsy in birch stands was 477.7 ha, including 418.8 ha requiring control measures.

In 2017, pests and diseases of this ecological group damaged mainly coniferous plantings.

As of the beginning of 2017, shootout centers operated on a total area of ​​277.1 hectares in the Kobrin, Polesky, Stolin forestries of the Brest GPLHO, Vasilevichi, Kalinkovichi, Rechitsa, Svetlogorsk forestries of the Gomel GPLHO, Bobruisk forestry of the Mogilev GPLO. Under the influence of natural factors, the pest foci died out in the Brest GPLHO (1 ha). At the end of 2017, runaway foci remained active in all the above forestry institutions, on a total area of ​​281.1 hectares. All of them do not require control measures. 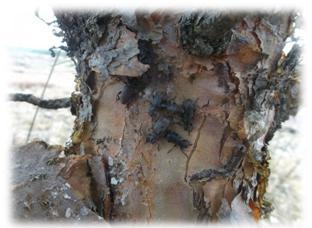 At the beginning of 2017, the centers of pine weevil operated on a total area of ​​304.1 ha. In 2017, foci re-emerged on an area of ​​41 hectares; 50 ha of pest outbreaks were eliminated as a result of forest protection measures.

In the Verkhnedvinsk and Lepel forestries, the aphid center was eliminated on an area of ​​5 ha.

In Polesskoye (1 ha) and Stolin (1 ha) forestries, the existing foci at the end of 2017 were a single sawfly-weaver on a total area of ​​4 hectares. 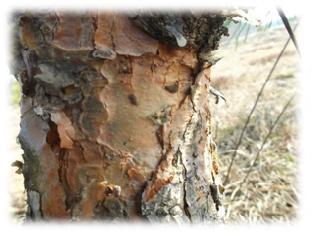 As of the beginning of 2017, foci of a pine sub-root bug were operating on a total area of ​​72.5 hectares in Ivatsevichi (3 hectares), Kobrinsky (7 hectares) leshozes of the Brest GPLHO, Grodno leshoz (21 ha) of the Grodno GPLHO, Glussky leshoz (41.5 ha) Mogilev GPLHO. Under the influence of natural factors, the pest foci died out in the Rossonsky forestry (12 ha). Foci again appeared in the Ivatsevichi forestry (3 ha). The foci of a pine-headed horse bug in Brest GPLHO (10 ha), Grodno GPLHO (21 ha), Mogilev GPLHO (41.5 ha) remained active. 3 ha control measures are required in the Ivatsevichi leskhoz.

The area of ​​the foci of diplodiosis operating at the beginning of 2017 was 26.3 ha; during the year, foci were identified on an area of ​​16.4 ha, in Baranavichy (6 ha), Logoisk (9 ha), Minsk (9 ha) and Belynichi (1.4 ha) leshozes. Forest protection measures were carried out on an area of ​​1.4 ha, pruning of the affected branches with their subsequent burning, and also died out under the influence of natural factors – 1.3 ha. At the end of the year, foci remained on the area of ​​40.0 ha.

Protecting forests from pests and diseases

State institution for the protection and monitoring of forests “Bellesozashchita”